What a great way to start off the 2018 show season! Lia Calyon and Mary had a super first outing this year, and Lia kept her cool for Mary wonderfully throughout the weekend. This is Mary's second show riding first level and she was awarded a 64.6% for a beautifully ridden test! Lia has such talent and ability - after much of the winter off, she has come back to the show ring without missing a beat! Lia and I had another successful outing at second level (65+%), and I am looking forward to progressing with her!

Krista and Rebar had the ultimate comeback! After Rebar suffered an injury to his withers that actually fractured vertebrae. These two pulled great scores, with the high score being a 67% at first level test two! Not to mention this their first attempt at first 2. They did me proud and am excited to coach them through ODS Championships. Love seeing this beautiful young rider take her 18-year-old QH and kick butt in the dressage arena. So close to home, as my first horse was also a QH that had "worn many hats" by the time I got handed down to me. Similar story with these guys. Ranch horse, trail pony, or anything in between - dressage does the body good!!

Mobius Strip aka Mobi was a star at his first ever dressage show! He took it all in stride and behaved like a champ. We ended up with a 64% at first 3 and got a blue ribbon for his first 2 class! This spicy off the track TH has beautiful ability and athleticism but is not always focused and relaxed. It has been an educational and rewarding adventure developing him from an underweight, under muscled ex-racehorse to a cute dressage prospect. Furthermore, I have sold him to Janet who now is one of my most beloved MAD teams, that is Janet and Mobi. Janet has done such an incredible job learning, and diving head first into the journey that is owning and training a horse. Not to mention a slightly difficult, hot, untrained, overactive horse! I am very excited to not only see Janet aboard her red rocket in the show ring but further bring him up the levels with tactful, patient training.

Prince Charles MSE (Master of the Stink Eye) was a super star in every way! This was only his second show, and he cleaned up 4 blue ribbons at first level!! And thanks to Charlie, I won the open high point raffle. Thank you Gallops Saddlery! He was a little anxious in his stall at first, and besides one test in the indoor with him screaming the whole test (still a 70%!), he settled into the show scene nicely. This horse has such a history, and he and Jessica have had many ups and downs ( including but not limited to saddle fit issues, trailering issues, Jessica undergoing/rehabbing from hip surgery ). I am so proud of Jessica for growing tremendously as a rider and a horsewoman - all because Charlie can be MSE from time to time. She never gave up and because of that Charlie is becoming a solid citizen - being quite the show horse is bonus. However that icing on the cake for the whole weekend was after all the success Charlie had in the ring, he topped it off by loading and trailering home like a pro! Those of you who know his trailer journey have an idea of what this means! It was an indescribable moment for me seeing Jessica walk out of that trailer after loading her boy, a beaming, proud mama!!

Not much more I can ask for - having so many great students and horses in my program, each one attaining success in the show ring, competing my own horse that is healthy and sound at grand prix, and all of us dedicated, and having fun. 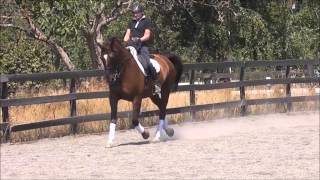